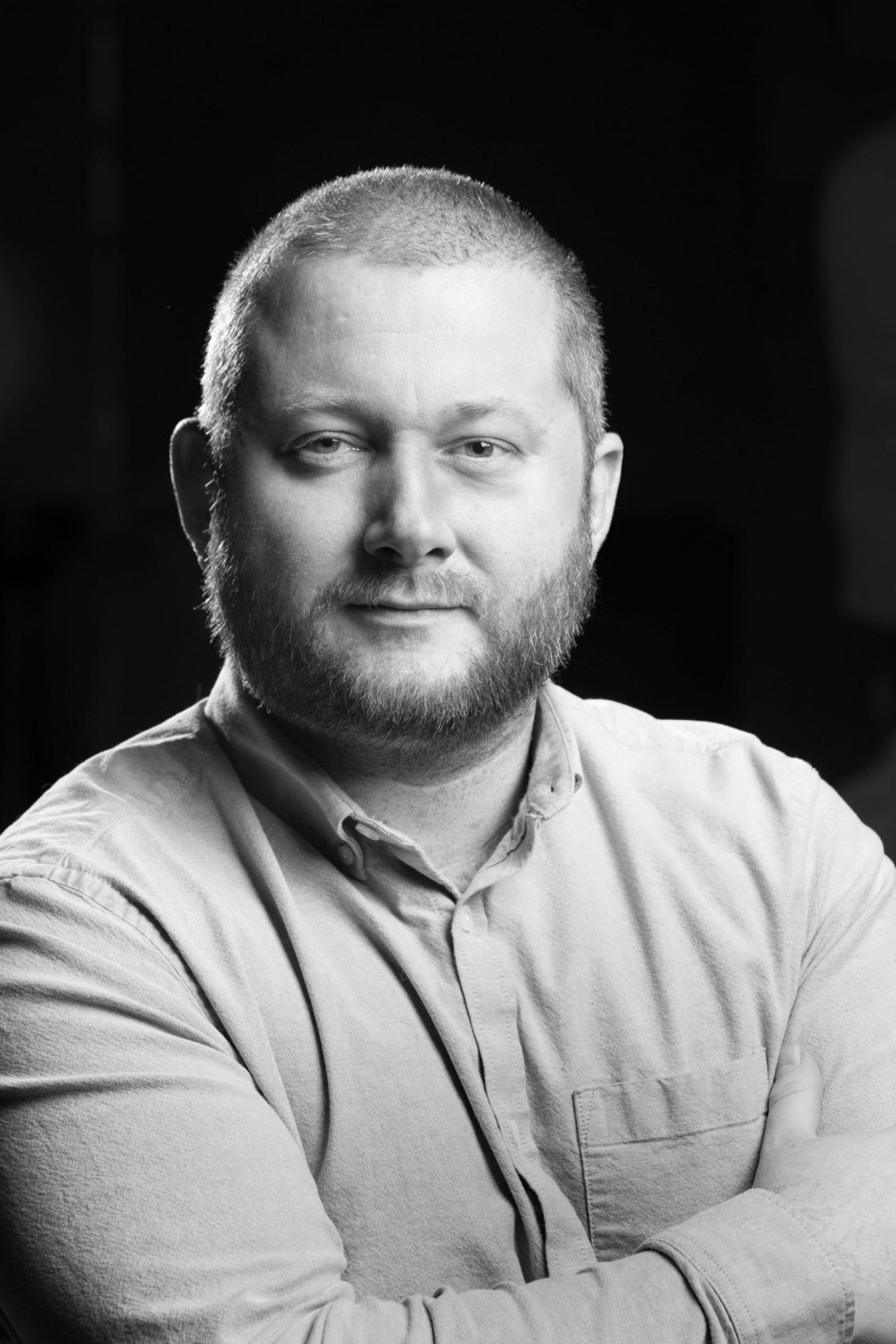 We sat down with Chris “Hollywood” Holmes, the department head of the Audio Engineering & Production program at the Centre for Arts & Technology. Here is what we learned:

Q. What made you decide to become an audio engineer?

A. I think like most people who end up in this line of work, I started out as a musician myself. I begged my parents for a drumkit when I was 13, and while it took two years to convince them, once I started playing I didn’t stop.

I really enjoyed playing, but I found myself gravitating to the recording side pretty quickly.

My dad had a laptop that I’d plug a basic dictation microphone into and I’d record my band’s terrible songs. Eventually, I got a job and started working consistently enough that I bought a small recording setup instead of a car.

As I was nearing graduation from high school, I had that moment of panic when you realize you’re going to have to work a real job for the rest of your life soon. I’d had enough of the hospitality industry and decided to take a chance on being an engineer professionally, so I signed up for a recording school.

Q. Did you study/train for your career? If so where?

A. I knew that if this was something I was going to spend the money on, and really give it my all, I wanted to do it in a “music mecca”. I set my sights high, and decided to enroll at the Los Angeles Recording School (LARS), where I spent the better part of a year having the most incredible time learning to make records.

It was a lot of hard work, with very little sleep, but there was something about the energy of working in a place like LA. Everywhere you turned you would meet someone who did something, or someone who worked for some huge A level person you inspired to.

Q. Can you tell us a bit about your career so far?

A. I was one of those lucky people (or unlucky depending on your perspective) who got to grow up in what I’d call the traditional studio environment.

While I was still in school, I got an offer to interview for an unpaid internship at this studio called The Mix Room in Burbank. The Mix Room happened to be owned by this guy named Ben Grosse, who to this day is probably my favorite engineer/producer.

I somehow got the job, and by the end of the week I was running off to get Ben his food every lunch hour, and scrubbing toilets, but I was working in a “real” studio. It was surreal for me at that time, because I was just some kid from Prince George, and suddenly I was in a studio where Kid Rock was in one week, and then Velvet Revolver the next.

The job was not easy, but it was an incredible leg up for me. I had to do horrible jobs like clean out a dumpster, clean toilets, deal with really mean clients, and – all and all – be the scapegoat for anything going wrong at the studio.

But the flip side to that is Ben understood the value of the lowest member of his team, so he allowed me literally hundreds of hours of off-hours’ time in his studio.

After about six months of interning there, I was promoted to Runner. All that meant was that I was now getting paid to do all the same jobs, and I couldn’t have been happier.

As time progressed though, I noticed that Paul, the assistant ahead of me, wasn’t looking like he was going to go anywhere. I started to wonder what my long turn outlook at the studio was, and began to feel like I should move on.

Not even a week later a friend of mine (who worked at LARS), told me that this production team called The Matrix were doing a cattle call for a new assistant and had asked for 40-50 resumes. She offered to add mine to the pile, but I really didn’t hold out much hope for getting the job.

At that point, The Matrix was one of the biggest songwriting teams in music, and I had this assumption that they’d be looking for some super assistant or something.

Basically having forgotten about it, suddenly three weeks later I got a call asking me to come in for an interview. Long story short, after two interviews and over 50 candidates, I somehow got picked to work for them. I actually couldn’t believe it when Scott (Spock) called to ask me if I wanted the job, and really couldn’t believe that I was jumping from one dream job to another in less than two years.

I worked for The Matrix for about four years, and worked with an insane variety of artists in that time period. But the job did have its drawbacks, mostly in hours. I was working 80-100 hours a week six-seven days a week for four years straight. I rarely took vacation time, or any long breaks, and I felt myself getting burned out.

That’s when I decided to move back to Canada and see if I could make a go of working in Vancouver. Before long I was chief engineer at Greenhouse Studios, where I stayed for another five years working with hundreds of bands, ranging from A-level to local artists.

Since then I’ve been fortunate enough to work freelance as an independent mixer and occasional engineer/producer, and it’s allowed me to kind of live wherever I want and work as much or as little as I want.

Q. Can you namedrop some of the great artists you’ve worked with?

A. I’ve gotten to be in on sessions with a lot of great artists, and – especially during my time in LA – there was almost always someone in that higher level of things. I worked with Katy Perry on and off for the entire time I was with the Matrix; worked on two different Korn albums; Ricky Martin; Mandy Moore; Vanessa Carlton; and dozens of really talented artists that never quite got their chance. Since being back in Canada, I’ve done stuff for Faber Drive, The Veer Union, Hot Hot Heat, Mounties, and hundreds more.

Q. What has been the best or worst session you’ve ever worked on and why?

A. BEST: Best session I’ve ever worked on was probably Korn. Growing up in the late 90s, Korn was pretty much the biggest band for me during high school, and suddenly five years later I was working with them for about 7 or 8 months. It was so surreal being in the room watching them write music after being a fan for so long.

WORST: While I’ve had a ridiculous amount of bad sessions in my life, I think it always is a result of the same thing: artists who don’t actually know what they are doing. It happens more than you think where an artist comes into the studio and simply is a terrible musician, or can’t really write songs, and you basically spend the whole time trying to make them sound as passable as possible. It’s really mentally draining when you’re basically playing an audio janitor.

Q. Do any specific musicians inspire you?

A. I wouldn’t say I’m inspired by any specific musicians, I’m more inspired by talent and effort. The genre of music you play is irrelevant if what you’re making is good.

If I look at the artists I’m really into right now, it’s really varied. I’m really into this rock band PVRIS right now; I listen to a lot of metal, but then counter to that I have had Porter Robinson on repeat for months, and I still listen to pop country pretty frequently.

Q. What is the best concert you have been to?

A. My best concert is an easy one for me: Pantera/Slayer/ Static-X in Vancouver on July 26, 2001. Pantera and Slayer were my favorite bands at the time, I had literally graduated from high school the month before, and I got to make a road trip to Vancouver with a group of my best friends. It was the perfect combination of all my favorite things in one insane weekend.

To top it all off, the show was absolutely insane, and pretty much set the standard for which I judge all other shows.

Q. Have you produced any local bands?

A. I haven’t really broken into the Kelowna market much. I did a single for The Fallaways which got a bit of radio play in Kelowna about a year ago, but my primary client base is still in Vancouver.

My goal for 2018 is to find a Kelowna band to develop and really create a fantastic product, as I think it’s about time I start spreading my wings a bit here as well.

Q. What does the future landscape look like for audio engineers in the Okanagan and in Canada?

Audio engineering is in a weird spot right now. After about 15 years of decline, the music industry was up about a billion dollars in 2016, and it seems like things are kind of settling again.

The biggest areas of growth now seem to be in the post audio in video game markets, with video games in particular kind of leading the way in some really cool tech innovations that I can’t wait to see really implemented.

Q. As Department Head, what do you think is the coolest thing about CAT’s Audio programs?

A. For me, I think the biggest thing is the variety of the program.

When I went to recording school it was recording, and that’s it. There was no professional development, no music theory, no songwriting, no production/programming skills, and I only learned on one DAW.

At CAT, we cover all of the above, three different DAWs, as well as game audio, post audio, and we’re always trying to find ways to expand and diversify the program.

Our Electronic Music Production course has really turned in a really strong powerhouse program for people who want to learn how to make EDM music or anything with high production value.

Q. What words of advice would you give to a student interested in the field?

I think a lot of people look at audio as this fun job, without realizing that it’s actually a very difficult and very stressful job.

Every project you’re setting a benchmark for what you can do, and you have to constantly improve to stay ahead of your competition and keep yourself relevant.

It’s long hours, grueling repetitive tasks, and an incredible amount of accounting and bookkeeping; BUT you get to work on music.

You know that feeling you get when you wake up in the morning and you don’t want to go to work? I can count
the amount of times that’s happened in my adult life on my hands. Before I worked in audio, I’m pretty sure it was almost every day. It’s a trade- off, you got to work hard to get the reward of being happy with what you do.