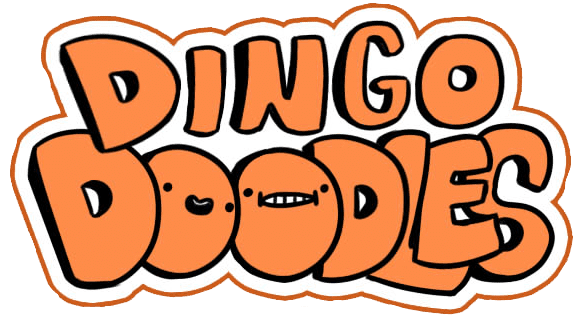 Jenna Woldenga is a self-made successful YouTuber. She is a 2015 graduate of CAT’s 2D diploma program and hit gold several years later launching her animated videos through her channel ‘Dingo Doodles’. It is now her full-time job. As of me writing this, she can boast 655K subscribers and some of her videos have garnered upwards of close to 4 million views each. I am very proud to call Jenna a CAT animation alumnus and had a very nice chat with her about all of this crazy success.

SR: Tell me about Electric Bunny, your first web comic?

JW: I started EB in 2012 and consistently kept it up while at CAT. EB I finished around 2018 and then transitioned to YouTube to start Dingo Doodles. I used the medium of the webcomic to practice telling jokes and it got to the point where I’d gotten what I wanted from it.

I worked for a year while keeping up EB and then a comic I made went viral and a company contacted me, Starbreeze Studios. They develop the video game series Payday. They gave me a year contract to make content for those games, which involved working in my art style but illustrating one-off jokes specifically for their game titles. I squirrelled away the money I made and took that chunk to set me up for a year to do what I wanted. I put it into launching my YouTube channel.

SR: How did the name of Dingo Doodles come about and how long was the idea brewing?

JW: Dingo is the name I got in my first college in Edmonton. I had a friend with the same name as Jenna and we immediately decided we needed nicknames to set ourselves apart. With my last name ‘Woldenga’ she said that sounds just like the dingo and that stuck. Even my friends now from that college don’t remember my real name anymore, they just go by the nickname.

So, dingo, which is my internet username as well, was a natural transition and then doodles because I wanted my channel to have no pressure on it. To be just an experiment and a big sandbox for me to play and try things out in.

SR: How long has the idea for your YouTube channel been brewing?

JW: I had wanted to do a YouTube channel since 2013 but I had not obtained any of the skills I wanted for it. I came to CAT to learn the 2D skills that would allow me to apply this to my own ventures and goals. I can do what I do on YouTube because CAT taught me all of what I needed.

SR: When did you start to see traction with Dingo Doodles?

JW: I started DD on April 3rd or 4th, 2018 and posted my intro video the next day and in the first week I gained 30-40,000 subscribers. It was just like that, it was insane. It had taken me over five years to get 15,000 followers on Facebook for EB but a week to get that many subscribers on YouTube. In four months, I reached 100K subscribers and it freaked me right out!

My first video was ‘Dungeons & Dragons’ related and it was a niche genre, nobody was really doing this, and I was the first one to come at it a little differently. The market was a bit of a wild west with approaching D&D content this way, so I hit it at the right time. The entire thing was luck, but it was the perfect brew, people were hungry for it. Nobody had done an episodic series and it took a couple of videos, but I was one of the first to tackle it this way.

SR: How do you monetize this?

JW: YouTube has monetization done through the number of views you receive. Every view you get a couple of cents, 2-3 cents and the ad revenue rates change every day, kind of like the stock market. It can be quite volatile and is usually related to the season. It’s tough to rely on and you need to be smart with it.

On top of that sponsorship pays as well. I have been contacted by these companies who ask if I can mention their product in my videos. If it’s at the beginning it pays more, costs them more than if it appears at the end of the video. The views count more than the subscribers. People who subscribe don’t necessarily watch your stuff.

SR: How often are you producing new content for Dingo Doodles?

JW: I try to get a video out there once a month as they generally range in length from 15-16 minutes. You have the writing, voice acting, animating, etc.… it’s a full-on production and I’m a one-person team.

SR: What’s been the best and worst part of this process?

JW: The best is that I get to be creative and people react positively to it. On the worst, that was the moment when I had reached 100K subscribers so quickly and it hit me that I have a lot of people possibly expecting me to deliver each and every month. Something you were making, kind of for yourself in the beginning, the realization that people have certain expectations and the pressure of not knowing if you can deliver or if something you might do or say will set people off in the wrong way. You can get this ‘imposter syndrome’ like do people really like what I’m doing? I had to work through that quite a bit, but I’m much more relaxed about it all now.

SR: What are your future goals?

JW: I want to transition into television eventually. My philosophy is to try, fail, try, fail because that is how I’ll grow and create opportunity for myself.