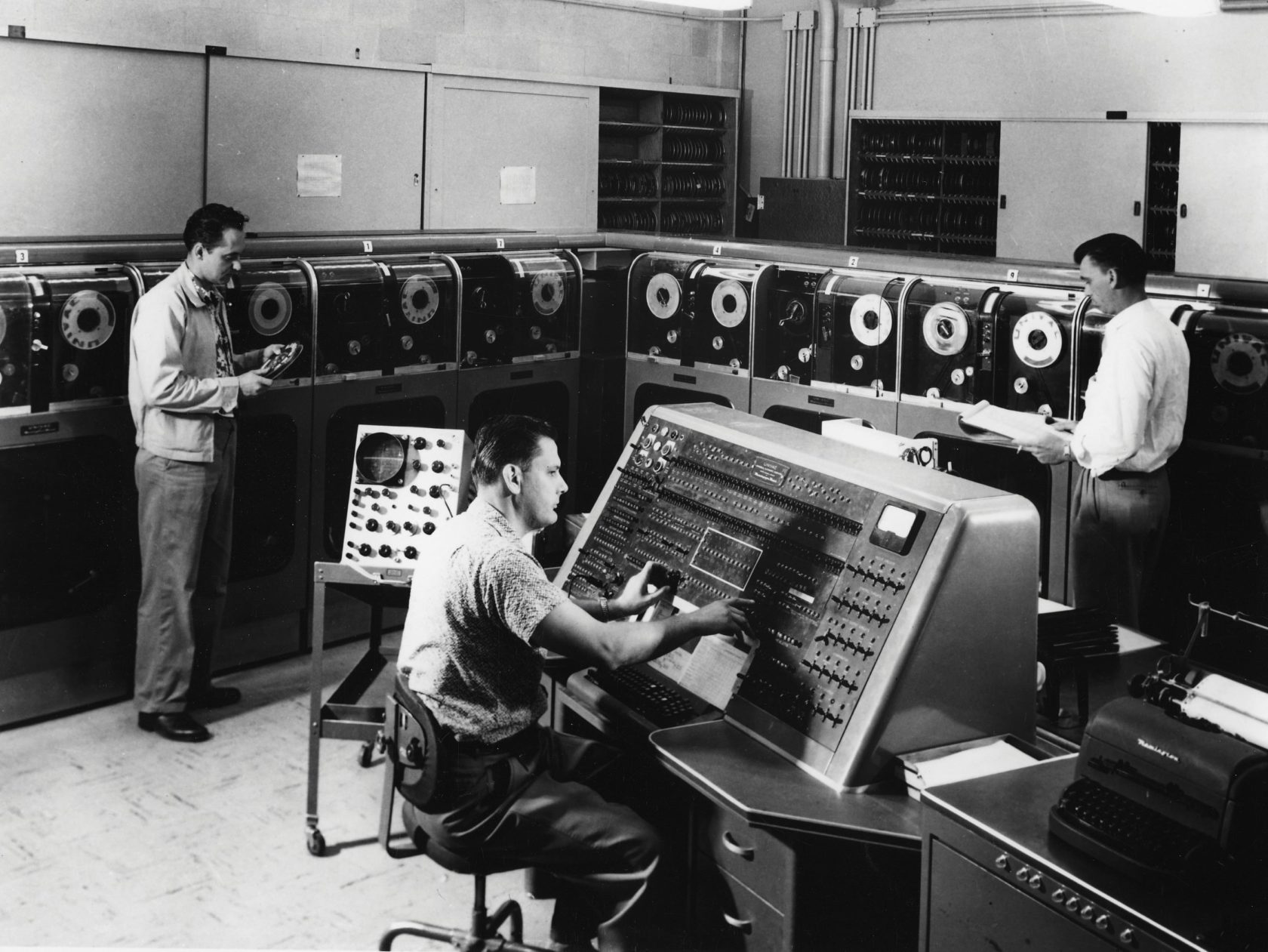 How times change. Network Security Specialist instructor Fred Brown has been in the computer business for 50 years, and can remember when one single machine could take up an entire room.

Q. How did you originally get interested in computers?

A. It was mostly by accident. The high school I was attending was offered a “free” computer. It took up an entire classroom and by today’s standards was less powerful than an average digital calculator. I wasn’t involved in the move of the computer but they wanted someone to catalog the engineering drawings. I volunteered, mostly because I wasn’t into sports or other extracurricular activities. I soon learned how much fun it was to get the computer operational and to assist in programming and maintaining it. So much so, that I and a friend decided to apply to a couple of colleges to pursue a degree in Computer Science. We were both accepted to both colleges and we chose the one that seemed to offer the best mix of courses and co-op experience.

Q. What did your education in computing sciences look like in 1968?

A. In England when I was in high school, for the last two years you had to pick three areas to specialize in. I chose Math, Physics and Chemistry although I didn’t know what I wanted to do once I graduated from high school. The arrival of this behemoth of a computer changed all that. Math was still useful but physics and chemistry became less of a focus. I still did well academically but all my spare time was taken up with this new fascinating area.

The college I attended (Hatfield Polytechnic) was one of the early ones to offer a degree in computing science. In 1968, computing was still a relatively new field to specialize in.

You have to realize that the Internet hadn’t even been developed at the time I started college. In fact, TCP wasn’t published until a year after I graduated in 1972.

Most of my formal education at the college focused on learning programming languages like Algol, Fortran, Basic and Cobol and computing fundamentals like hardware design, assembly language programming and flowcharting. Towards the end, they added things like understanding operating systems. There were courses in humanities and other non- computing areas as well but I mostly enjoyed – and did better at – those courses that were computing specific.

Q. Tell us about your first publication regarding computers?

A. The first – and only – paper that I published was a joint effort between me and some colleagues at the Culham High Energy Laboratory. This is where I spent my first six- month co-op session.

Their main focus was in nuclear fusion research and they needed a fairly sophisticated computing facility to support that research. I joined as a member of their computing team and one task I was

given was to port a large Algol program that has been developed by the Royal Radar Establishment (RRE) to their mainframe computer. It was a compiler writer. You could develop a new programming language from scratch, feed the syntax of that language into this program and it would create a compiler for that language. At least, that was the theory.

In practice, although Algol was designed to be independent of the hardware on which it ran, each implementation of Algol differed slightly from any other. I was tasked with working out the bugs and getting it to run. The paper documented that work. It was interesting when I got back to school after the paper was published. One of my lecturers was so impressed that she used this paper in teaching one of the courses

I attended. Needless to say my head swelled a little at that. Incidentally, my second co-op session was at the RRE. Coincidence? I’ll never know.

Q. What would you consider the highlight of your 50 years in the IT industry?

A. That’s a tough question to answer. There have been so many highlights in my career – and a few lowlights too. I’ve been very fortunate to be able to stay with one career since graduating from college. Most of my highlights have come from my peers looking up to me as someone whom they can trust to give them guidance even when I don’t necessarily know the answer.

When I joined Digital Equipment Corporation (DEC) in the UK, back in 1973, and went to their corporate head office in Massachusetts for training, I was asked to teach colleagues from all corners of the world on a new operating system feature that was being developed. So rather than learning, I was teaching after only one month with the company.

Starting my own IT consulting business was another highlight. It started with the lowlight of being laid off from a company in Kelowna but quickly became a highlight when I realized that I could stand on my own and start a new business. That was in 2000 and I still have that business almost 18 years later.

Q. How did you become involved in the Variety Show of Hearts?

A. The company I worked for (DEC) was approached by Variety in 1985 to develop a replacement “results network” for their annual ‘Show of Hearts’ Telethon. One of my colleagues developed the first version – written in BASIC – with some assistance from me.

He and I supported it for a few years until he left the company, at which time, I became the only developer and supported it until 2000. That year it started showing its age so I approached them about redeveloping it based on Windows and SQL Server or having them find some off- the-shelf software in its place. They couldn’t find anything commercially available so I developed a new version in time for the 2001 Telethon. That version continued to be enhanced to include online credit card authorization, printing of the prize draw tickets and displaying the donor names on the bottom of the TV.

Its last year of use was for the 2015 Telethon, at which time they went with a commercial product. It’s amazing that each implementation lasted fifteen years before needing to be replaced.

Q. How did you get involved in the mining industry?

A. I was engaged by Teck Resources back in October 2009 for a two-week engagement to review their Public Key Infrastructure (PKI) system and make recommendations for any changes. My recommendation was to replace it completely since it was not implemented using best practices. That two- week engagement lasted many years and continues to this day. I redesigned and implemented a replacement PKI and then went on to many other projects there.

Goldcorp likewise engaged me to design and develop their PKI, and I’ve been engaged with them for several years as well.

Q. How did it come about that you were chosen to open the Anderson Morgan branch in Kelowna?

A. That’s an interesting question. I’d been running my own consulting business for about eight years when
I received an email from someone saying they were interested in a partnership. I initially thought it was a scam but didn’t delete the email. I re-read it a few days later, did some research on Anderson Morgan in Australia and noticed that the number to call was a Kelowna cell phone. So I called it and this person with an Aussie accent answered. It was a genuine offer of interest.

The two of us met and we had similar interests and approaches. After several meetings, we formed Anderson Morgan Kelowna as an offshoot of the Aussie company. Raoul Anderson was born the same year I moved
to Canada in 1976. I was 26 at that time so there’s quite a difference in ages but we work well together to this day.

I asked him how he found out about me and my company, and apparently even though we were just a two-person company, an Australian research company discovered our existence and when he spoke to potential clients here in Kelowna, my name was mentioned as a knowledgeable and experienced consultant. Who would have guessed?

Q. If you could leave your students with one lesson to take with them into the IT industry, what would it be?

A. Enjoy what you do, do the best you can, and be passionate about IT. The IT industry has grown so much over the past 50 years and it will continue to grow over the next 50 years. But the fundamentals haven’t changed a lot. I’ve always strived to do the best I can and to keep learning at all times. I would encourage my students to do the same.

The IT industry needs to be your passion or it’s not the place to be. You can’t expect to think of it as a 9-5 job that you can walk away from at the end of the day. It has to be in your blood. I tell my friends that I’ve discovered the perfect hobby – one that I can be paid for.

Q. What one thing would you want the regular person to know about IT and their own security?

A. There’s a catchphrase that goes like “IT security is everyone’s responsibility” and it’s really true. It comes down to understanding that in a business environment or even your personal use of computers, everyone needs to be aware that there are bad people out there.

It doesn’t mean that you need to be afraid to use your computers or mobile devices on the Internet anymore that you’d be afraid to cross a street at a busy intersection or drive your car in the rush hour. But you need to be cognisant of what’s around you. You wouldn’t cross a busy street without looking to ensure it’s safe or drive your car in the rush hour without being aware of the traffic. Similarly, you should always be on the lookout when you’re using your personal devices and if you don’t know the source of an email or something looks “wrong” when visiting a web site or looking Facebook post, trust your instincts.

It comes down to practicing safe computing.